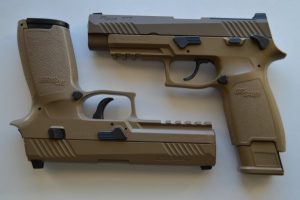 In 2017 the U.S. Army adopted a special adaptation of the SIG SAUER P320 pistol as the new sidearm to replace the Beretta M9.  The Beretta had served in that role since the mid-1980s and the military was looking for a Modular Handgun System to replace it.  Trials were held and when the smoke cleared (literally!) the SIG came out on top.  Obviously, a huge coup for SIG SAUER of New Hampshire, the U.S. arm of the Swiss-German parent company.  Being a large multi-national corporation has its perks and one of those is the ability to form divisions that make products which compliment your core business.  SIG did just that several years ago to license and sell branded airguns and accessories known as the SIG Advanced Sport Pellet line.  It’s really nice when your parent company owns all the rights to a design because they can copy that design into a new airgun in a very short turnaround time.  By SHOT Show 2018, a 3-D printed prototype M17 was on display.  As of SHOT 2019 it was a production reality that was already shipping to retailers. [Side note: in 2018 SIG SAUER also increased their commitment to the world of airgunning by becoming a charter member of the Airgun Sporting Association, an industry association promoting all aspects of airguns and airgun hunting. (Airguns of Arizona is also a charter member by the way.) Along with that they began to pull all airgun manufacturing back to the U.S. and re-branded as SIG AIR.]

The M17 is a cool .177 replica with even cooler bells & whistles such as an all-metal slide with blowback feature, ambidextrous safety, dust cover rail for mounting accessories, field-stripping capability and the Rapid Pellet Magazine.  For those unfamiliar with RPM, it is the SIG AIR patented belt-feed system.  Holding 20 pellets, the belt rides inside a plastic stick magazine which, in turn, is inserted into the drop-free extended magazine.  The RPM only fits one way in its channel so all the user has to do is avoid loading the pellets backwards by paying attention to the wording molded into the plastic RPM housing.  The CO2 cartridge, along with a clever cam lever piercing mechanism is also housed in the magazine.  Open the lever, drop in a cartridge, close the lever and the magazine is charged.  No hex wrenches to misplace and no exposed wing nuts to fiddle with or spoil the lines of this replica.

The only operator control that is non-functional is the ambidextrous slide lock release lever.  It is there just to add to the realism as the slide does not lock back.  The take-down lever, however, is operational and the owner’s manual shows black & white photos with text on how to remove the slide and barrel housing to clear a jammed pellet.  The steel barrel is 4.6 inches long and SIG AIR claims a velocity up to 430fps.  The color is called “Coyote” tan and the pistol weighs in at slightly over two pounds. The MSRP is $140 and a one-year warranty is provided. My sample is marked “Made in Japan”, but as mentioned earlier, eventually all airgun production will be in-house in New Hampshire.

Being the windbag that I am, I’ve run out of my allotted space so details on how it performed will have to be in a separate blog.  Airguns of Arizona does not yet have this model listed on their webpage, but if you are a replica collector and can’t wait to get your mitts on one of these beauties, reach out to them and they’ll help you out.

Posted in Airguns | No Comments »